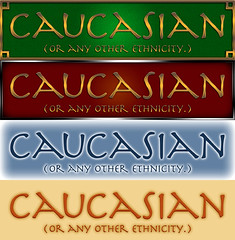 *Will be adding The Last Airbender review and a post about the protest at a later date*
Bryan Konietzko and Mike DiMartino art book signing!: 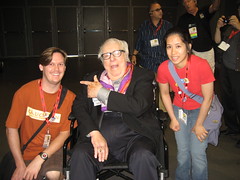 No, unfortunately I didn't talk to Ray Bradbury about Racebending: sorry :-( Oh.. and who's the jackass that goes out without shaving?!
Earlier:
Aang aint white -letter: What if?...
What Aang should have looked like...
Pix:
I will...

[Add more things to this spot]

***I have no clue as to why the wrong videos are showing up, so I've provided links***

Maybe someone can help me with this one bcz I might have entirely gotten things wrong. So I'm watching this trailer for an upcoming Tom Hanks / Halle Berry movie and I see something really strange. No, not Hanks' facial hair; Jim Sturgess in Yellowface[starts at 1:53]:

So Yeah, Comic-Con came and went, and it felt pretty much the same as it did last year for me. Nothing too spectacular, and anything big we may have missed we heard about afterward. The place was over crowded and the lines suck, as always. They've got to do something about those lines. Well, it's not that they're long, it that people will get into one line to get into a room hours before what they really want to see starts, thereby keeping other people from getting into what they want to see when the first people don't really care about it. There are some exceptions, though: we were in line for Penn & Teller (same as last year) outside and it was late and cold. The panel before P&T was Voltron, and even though the room was large, and it was [ooh] Voltron, there was still very few people in there; so they decided to let the P&T people come in from the cold. The only problem with this was that when the Voltron people left there was a huge rush for those front seats.

[I really don't understand the LJ formating. It just seems to do its own thing at times.]

*Not a good printing size. I'll post those at the bottom, later.*
Long story short: last year at SDCC (2009) at the request of some friends on the IMDb message board for TLA film I wore a shirt with the controversial casting call "Caucasian or any other ethnicity" printed on it. It was out of protest for the casting, kind of a billboard for our frustrations at the time. It was something that seemed to be underplayed, but seeing it in reality, printed on a shirt, really gave it that "WTF" factor. But really, the whole thing was such a joke to us that it seemed even funnier on a t-shirt.

Found out about this signing from a Racebending.com FaceBook page link only about a few hours before hand, so we had to rush out of the house and get over to Golden Apple Comics, on Melrose Ave. in Los Angeles.

Not much to say; I just wanted to post some pix to share with the rest of you. Oh, and also there is a tidbit at the end you might find interesting.


Even thought this story was already posted by

hoyvinglavin64 (here: We've Made It Big!) I thought I'd share a little something with people who haven't seen the actual paper:

–But nothing too big. That is to say, the movie was quite predictable, so it would be hard to come up with spoilers outside of heroes win, bad-guys lose, and so-and-so died. But yes, there is a lot of death, dying, and killing in this movie. Truth be told though, they kind of show the whole movie in the trailer.

Okay, so I went to that screening that Mike mentioned the other day for The Warrior's Way, or whatever they are going to call it bcz the movie had a different title at the beginning, à la Heroes' chapter titles, that was lying in the sand: “Renegade”. Also, as mentioned before, it was formerly titled “The Laundry Warrior”. I brought my friend Alex along and we talked about it extensively afterward. I'll try to focus on the things that matter. Try...


So I haven't really been that active in the past month bcz of work, which I am now finished with, but I've still been able to somewhat keep up with things, sort of. Anyways, I came across this post on IMDb that is by far the craziest argument I'd heard yet. Once you reach the bottom I think it will speak for itself:

Turns out that the "fake language" that replaced the Chinese calligraphy(from the original series) is acutely a real language, just a dead one. Still don't know why they would change it anyways. Maybe bcz they don't have to be perfect with a language that no one will be able to read?

What is written on his head/arms is still unknown:

"...we're going to be revealing each one of the Avatar's tattoos every week till the film's release. Unless a devoted fan wants to do the work themselves [laughs]," says Dorothy Congres, a PA on The Last Airbender.

Note to reader:
Do not read if you do not want to get seriously pissed.

Stupid Arguments
or
Not only are you wrong but you're making yourself look like a big-ol' dummy.
From the IMDb message boards, The Last Airbender: For starters I wanted to post something from a troll, that was up for a few moments before being deleted, but it really makes you wander what those against the Racebending.com movment are really thinking. Wile I can't remember the subject line, it was designed to look like an anti-caster.

Sincerely,
Ching Chong Ching Chong."
Wile that wasn't exactly an argument, it just goes to show what this troll is up to. Actualy, this is the longest post they have ever writen (usualy lots of "CHing CHong Ching ChONG"), and I'm not really sure what side they are trolling for: they tend to mostly antagonize anti-casters.

Okay, now on to the real shyts. This is actually a new one I've never really heard before and it's some-what along the lines of the "hopelessness argument". Replying to a comment about "missed opportunities", BillyMaysFromBeyondTheGrave writes:

"I agree it's wrong. Looking at the information actually pisses me off. But I'm not the one who made the casting calls... those are the racist ones... not me. I'm sorry, I agree that it's wrong and I see your point. But there's a 90% chance that I will see this movie, on opening day even.

There are plenty of movies, now that I think about it, that have done this. And many of them are my top favorites. It's really sad when you notice your favorite movies try to only cast white people. It sucks, but that's the way the world is. I'm not saying it's right, nor am I saying it can't change, but it is how it is...


BILLY MAYS HERE WITH ANOTHER GREAT POST!"
Yeah... nice sig there Billy, but yeah: not a 'great post', at all. "It is how it is..." and there's no point in trying to change things? Hopelessness?! At least they acknowledge the truth, but ignoring it so you can feel good? This cracks me up, blame the studio but, "I'm not the racist one here". So no matter how racist a movie is, it's okay to support it bcz you're not the one being racist? Nice!

Not sure who this next poster is bcz they changed there name and are now calling theirself  "JohnMilson" –a play on "johnwilson-11" the "cracker" guy. :

"The casting sheets never said if your Asian don't show up."
"Anyone who is white can come here, and everyone else can come as well."--That doesn't strike you as odd? "Caucasian or any other ethnicity" –Preferably, they wanted caucasians. Seriously, you don't see what is so wrong with that? The usual reply here is, "I don't see color because I'm not racist blah blah... color blind blah blah... you're the racist one for pointing that out blah blah... we are all one people blah blah... I only believe in one race: the human race," but there was no reply, so I'm just going to have to assume.

xOxRonniexOx writes:
Subject: I dont care how racist this is but...

"I dont want to watch a movie that is full of asian actors... And I'm sure others feel like that also...

I like the casting... and quite frankly if aang was some asian kid I probably won't go see it..."
Not really much of an argument.. but I guess they are trying to argue that they don't want to see asians, so... yeah...

Subject: Forget race, why would you fail to correctly depict a character?

Don't care about the racial issues. Sokka and Katara are supposed to be eskimo people. Watch the cartoon. They aren't white people. So why purposefully fail to depict them accurately? It doesn't make sense to me. That's the real reason to be annoyed- if you are a fan of the show, they aren't accurately realizing the characters. By the way, the main characters aren't depicted as asian, so I have no problem with steering away from that.
What?! Am I just misreading this? Sounds like: "Forget about cars. What is up with those four-wheeled thing that are all over the road, with people sitting inside of them?!"

Until next time, this has been Stupid Arguments.

Disclaimer:
Users can change their name at any time; so if there is some problems with my accuracy, that's the reason.